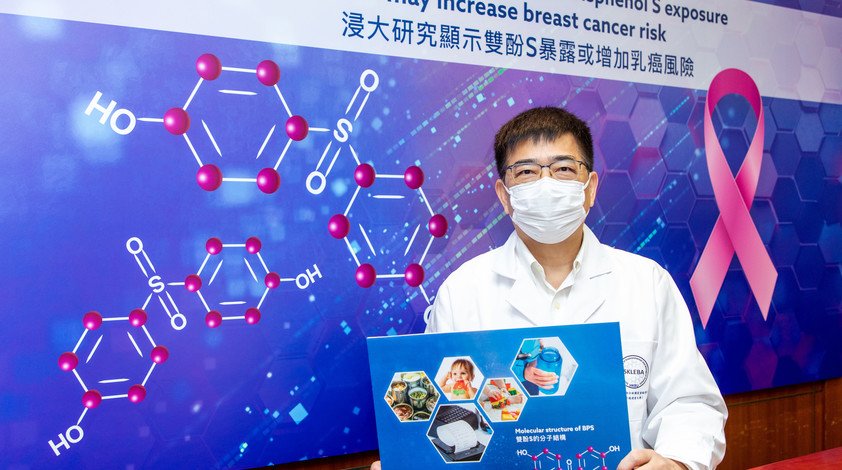 A study led by Professor Cai Zongwei, Chair Professor of the Department of Chemistry and Director of the State Key Laboratory of Environmental and Biological Analysis, has revealed that different degrees of exposure to bisphenol S (BPS), an industrial chemical widely used in paper products and plastic containers, are associated with the growth and deterioration of breast tumours in a mouse model. The research results suggest the need for more in-depth and comprehensive research on the potential negative impact of BPS on human health, and the ongoing search for a safer alternative for use in industrial production may be warranted.

In the past, bisphenol A (BPA) was widely used in the production of  baby bottles, food and beverage containers, the thermal paper used for printing receipts etc. As previous research has shown an association between BPA exposure and human endocrine system disruption, metabolic disease and an increased risk of breast cancer in recent years, scientists have looked for alternatives to BPA, and BPS has been used as one of the substitutes.

The research team  carried out several experiments to explore how BPS exposure at environmentally relevant levels affects the development of breast tumours, including the tumour’s morphological characteristics as well as lipid and protein distribution, with the aid of mass spectrometry imaging technology.

The research team found that a low dosage of BPS induces faster tumour growth, and a high dosage of BPS may ultimately lead to deterioration of the tumour. Through comparing the distribution of lipids and proteins in the BPS-exposed mice groups with those observed in human breast cancer tissue samples, the team deduced that exposure to BPS will increase the risk of breast cancer in humans.