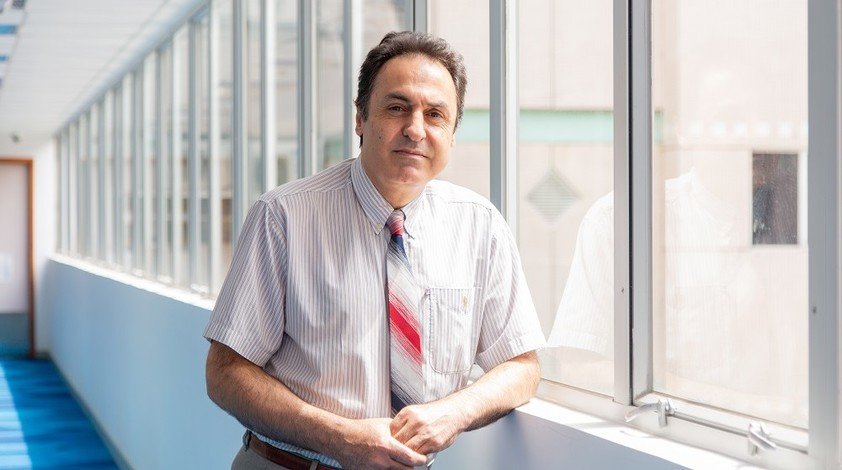 The healing power of light

This story is part of a series about the Talent100+ initiative.

For Dr Angelo Homayoun All, light holds the key to treating many of the diseases that affect the nervous system.

Having joined the Department of Chemistry as an Associate Professor in March 2020 from Johns Hopkins University in the US, Dr All is using nanoparticles and other techniques to stimulate or inhibit nerve cells using visible light. His work could provide a platform for neuroscientists and neuroengineers, and it could help those with spinal cord injuries and other life-altering diseases, such as Parkinson's and Alzheimer's.

"My research is multidisciplinary, and my work involves different areas, such as chemistry, medicine, biomedical engineering, imaging, and nanomaterials, but in everything I do, I keep the treatment for patients in mind," he says.

Born in Iran, Dr All moved to Italy as a child and he went on to study pharmacy and medicine at the University of Bologna and University of Verona, respectively. But it was during his surgery internship at the latter institution that he realised that he didn't want to focus on only clinical work for the rest of his career. Eventually, he moved to the US and Johns Hopkins University for a post-doctoral research position in the Department of Biomedical Engineering.

"My goal was to become a neuroscientist with the mission of sharing science with the rest of the world. I'm interested in translational research and I hope that in five years I can translate part of my research work into clinical studies in the hospital," he says.

Having moved up the ranks at Johns Hopkins and worked in a variety of different fields, from stem cell replacement therapy to the use of hypothermia to slow down nerve cell damage, he took a leave of absence from the institution and he joined the National University of Singapore (NUS) for four years. It was at NUS that he started to work on a new generation of nanoparticles, known as upconversion nanoparticles, that could hold the key to the non-invasive neuromodulation of the nervous system.

Let there be light

In many ways, the name given to upconversion nanoparticles underplays their function and potential importance. These minuscule particles, which measure as little as a few nanometres, can absorb near-infrared light, and they can be tuned to emit many different colours and wavelengths of visible light. According to Dr All, this characteristic enables them to target and modulate specific neurons in a non-invasive manner.

Dr All's interest in the nanoparticles emerged out of optogenetics, a novel biological technique that involves the use of visible light to control neurons. While the area shows much promise, it also has fundamental practical limitations, as it is impossible to get light into the brain and the central nervous system without invasive procedures. For example, a current technique to treat Parkinson's Disease involves the insertion of a long metallic electrode into the brain, which carries many risks, and it is not always feasible or recommended for all patients. However, the upconversion nanoparticles can be delivered to the nervous system in a less invasive manner, and they enable researchers to deliver light to the targeted area deep in the brain tissue.

Dr All is also exploring the use of newer opsins, which are light-sensitive proteins, and he is working with chemists at HKBU to replace the virus vectors, which are often used to transport genetic material in the body, with a safer biodegradable polymer.

With his varied background which incorporates expertise in medicine and other related scientific fields, Dr All is well suited to the interdisciplinary culture at HKBU, and his Master of Business Administration degree in healthcare, which he received from the Johns Hopkins Carey Business School in the US, has also given him a greater understanding of the business aspects of science.

"I was attracted to HKBU due to its expertise in nanomaterials and their applications in healthcare. One of the reasons why I joined the University is that I wanted to work with leading scientists, such as Professor Gary Wong, who is the Head of the Department of Chemistry. We're now collaborating on a few different fields, including luminescent materials, a new polymer and non-invasive delivery methods."

As for the next steps, Dr All is looking to expand his new lab and further develop the polymer and non-invasive neuromodulation techniques, and he hopes it will lead to the creation of a platform that will allow scientists from different backgrounds to treat a variety of diseases. In addition, he is working with others as part of the new interdisciplinary System Health Lab.

"These new nanomaterials could give scientists access to the central nervous system and it could help patients with various neurodegenerative diseases, such as Parkinson's, Alzheimer's, amyotrophic lateral sclerosis (ALS), and spinal cord injuries," says Dr All. "I would also like to test the idea of using these nanoparticles for diagnosis, as we could track them intra-neuronally as a cargo and study their retrograde and anterograde movements, which will enable us to detect cell dysfunction at very early stages, long before signs and symptoms of the disease can be detected in the patients."

Indeed, the future looks bright for Dr All's research, and it could potentially bring the light of hope to the many millions of patients affected by these conditions.