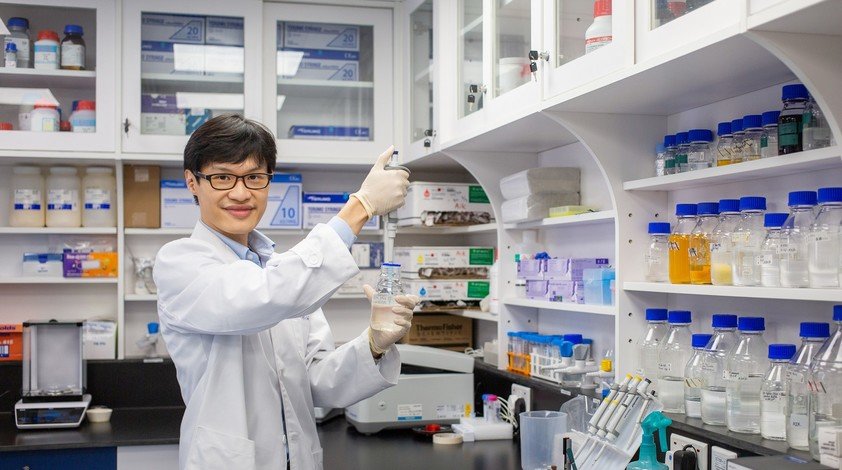 A quest to improve human health

This story is part of a series about the Talent100 initiative.

At first glance, Dr Aik Wei-shen's lab looks like any standard chemistry lab with various pieces of equipment and shelves of glassware holding chemicals and liquids. In fact, the lab is a hybrid of chemistry and biochemistry, and a relatively new one in the Cha Chi-ming Science Tower, which seems fitting for the young scientist. Within those brightly-lit walls, Dr Aik, Assistant Professor of the Department of Chemistry, and his team investigate an exciting yet perplexing problem: how to reduce human suffering, and in particular, how to develop molecules that have potential anti-cancer properties.

Chemical modifications play an important role in modifying and regulating the function of ribonucleic acid (RNA), a biological molecule that plays a vital role in the expression and regulation of genes in the body. However, dysregulation and mutations in several RNA-modifying enzymes have been associated with various types of cancer. In an interdisciplinary approach merging chemical and structural biology, the HKBU team led by Dr Aik studies the potential anti-cancer effects of small molecule inhibitors by using macromolecular X-ray crystallography to understand the binding modes of inhibitors at the atomic level. The researchers then take the three-dimensional structural information as a guide to understanding diseases, with the ultimate goal of developing inhibitors which can suppress the progression of tumours.

The project has received funding under the Research Grants Council's Early Career Scheme 2019/20, and the team has already obtained preliminary findings that offer a glimpse of potential molecules. Dr Aik believes that it is important for early career scientists to establish a foundation in their fields of research. "We are looking into identifying tools based on the structures of protein-drug complexes. Then we can build on this knowledge to design better drugs," he says.

When Dr Aik was growing up in Malaysia, he was always curious about what causes diseases and what can cure them. Motivated by the wish to understand the complexities of human health issues and finding solutions to reduce suffering, he studied Biochemistry at the University of Cambridge on a scholarship. "During my studies, I realised that in order to develop treatments more effectively, it is important for me to understand chemistry as well as the structure of proteins and molecules," he says of his academic journey of studying chemical biology and structural biology.

He has been moving in that direction ever since, earning a master's degree in Biochemistry at the University of Cambridge and a doctoral degree in Chemical Biology from the University of Oxford. He then conducted postdoctoral work at Columbia University in New York, where he gained experience of using structural biology techniques, such as cryo-electron microscopy, to obtain the structural information of macromolecules. Now in his own lab at HKBU, he has been incorporating chemical biology and structural biology techniques into his research projects.

A supportive environment for research

This relentless pursuit of knowledge brought the early-career researcher to Hong Kong in early 2019, when he joined HKBU as a faculty member under the University's Talent100 initiative, which was a recruitment campaign launched to attract top global talent from diverse disciplines.

For Dr Aik, research opportunities were one of the important factors he considered when he decided to make the move. "The support and resources provided by HKBU are indicative of the University's commitment to fostering interdisciplinary research collaborations. This enabling environment is important in promoting science and innovation," he says.

A culture of peer support also helped him feel quickly at home in his new position. Members of the faculty often meet and share ideas on research topics, and Dr Aik highly values these exchanges. Most of all, he appreciates how motivated his research team is. "Having people you can count on for help and support makes my experience here positive," he says.