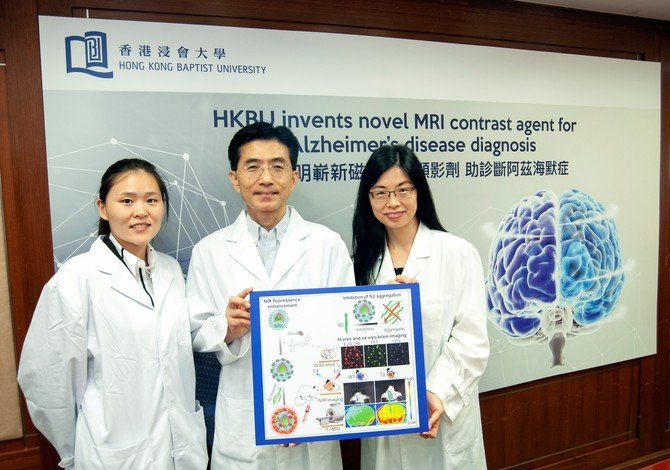 A research team led by Professor Ricky Wong Man-shing and Professor Li Hung-wing, Professors of the Department of Chemistry, has invented a novel contrast agent for magnetic resonance imaging (MRI), which enables real-time visualisation and detection of the size and number of amyloid-beta (Aβ) in the brain, a main hallmark of Alzheimer’s disease (AD).

The team loads and coats gadolinium-based nanoparticles, a chemical substance commonly used as an MRI contrast agent, with a specially designed silica layer that can accommodate a proprietary, non-cytotoxic fluorescent cyanine dye. The cyanine dye is an organic compound used to visualise and quantify Aβ proteins.

In model experiments with mice, the modified nanoparticles can bind with Aβ contents and enhance magnetic resonance signals, and differentiate Aβ contents in the brain in terms of size and number when MRI is applied. The invention offers hope for early detection and large-scale routine screening of AD. It can also help to assess the efficacy of drugs used to treat it.