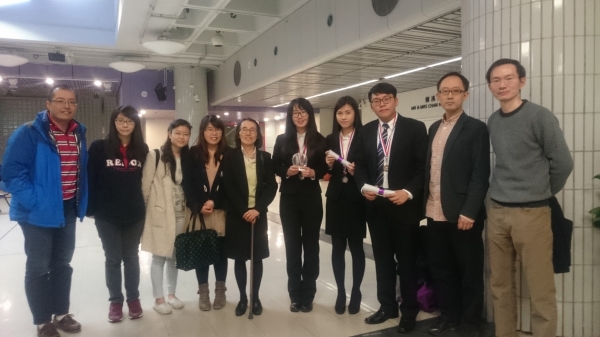 A team of three Chemistry students of HKBU won the silver medal in the 27th Hong Kong Chemistry Olympiad (for tertiary institutions) on 27 February. This year, the competition revolved around the theme “Chemistry and Justice”. Each of the teams from six local universities had to find the solution to a given chemistry problem within two days and present it within a set time limit in an open seminar. The HKBU team included Year 4 student Yang Min and Year 3 students Fok Wan-yiu and Chau Ho-fai. They were assigned the topic “crime fighting”.

For their assigned topic, the HKBU team showed the use of chemistry in forensic science. They simulated a murder scene with a knife on which the blood was possibly removed by the suspect, a threatening letter and a dusty floor covered with paint powder. The team used knowledge from across disciplines, from Chemistry, Biology to Physics, to collect evidence and solve the crime. They explained that the presence of iron in blood catalysed the fluoresce reaction of chemical luminol. In addition, the team used chemical methods to visualise fingerprints on the threatening letter and to prove that the paint powder at the scene was identical to that found on the suspect’s shoes. The students said that they mainly learnt theories in lessons and the competition enabled them to apply what they had learnt to real life. The team produced a short film to illustrate the forensic applications to make their presentation more interesting.

Dr Sam Hau, the team supervisor and Lecturer of the Department of Chemistry praised the team for their efforts. He was impressed by the creative way they presented their topic and their overall performance in the competition. Dr Hau also expressed his gratitude to the students for forming a support team to provide assistance to the competing team.