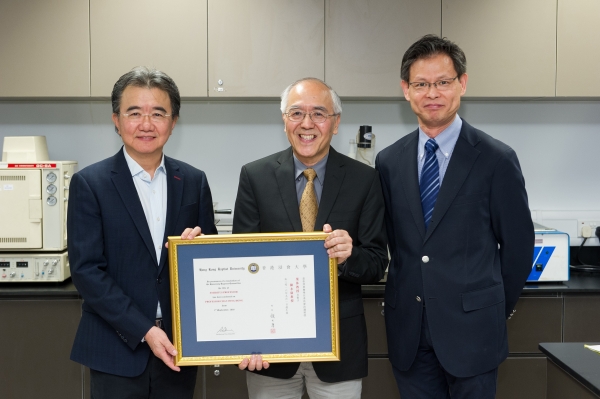 HKBU announced the conferment of the title of Emeritus Professor on Professor Chan Wing-hong, effective 1 September 2016, for his distinguished and sustained contributions to academic work and the University’s activities during his service of over three and a half decades. He is currently Professor of the Department of Chemistry and also Programme Director of the Bachelor of Science in Analytical and Testing Sciences and the Bachelor of Science in Chemistry.

Professor Chan joined the then Hong Kong Baptist College in 1981 as Lecturer and became Professor in 1997. He will have served the University for 35 years by the time he retires in August 2016. Professor Chan was Head of the Department of Chemistry from 1998 to 2007, leading the Department as it sailed through financial hardship arising from the Government’s cuts to higher education spending after the Asian financial crisis. A visionary leader, he identified analytical science and materials chemistry as two focus areas and helped steer the development of the Department. Professor Chan raised faculty members’ spirits during the difficult days and laid a solid foundation for the Department to scale new heights.

A prolific scholar in the areas of organic synthesis and analysis, chemical sensors, and supramolecular chemistry, Professor Chan has published over 200 refereed articles in leading international journals, and received over 3,600 citations as of January 2016. His collaborative research entitled “New Strategies for Fluorescent Probe Design and Signal Transduction” which discovered potential applications on living cell imaging, won the First Class Natural Sciences Award presented by the Ministry of Education, China in 2011. At HKBU, he received the President’s Award for Outstanding Performance in Teaching in 2006 and the President’s Award for Outstanding Performance in Service in 2012.

Professor Chan is also enthusiastic about community outreach as demonstrated by his leadership and engagement in a series of activities and training programmes which aim at enriching students’ learning experiences and engaging their interests in science. On top of his life-long passion for promoting science education, Professor Chan’s strenuous efforts have helped raise the profile and strength of the University and the Department.