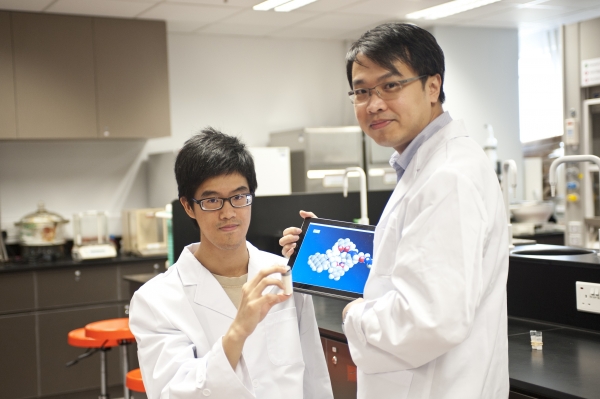 PhD student Kwan Chak-shing from the Department of Chemistry of HKBU received the Chemistry Central Journal Prize for his poster presentation entitled “A Fluorescent and Switchable Rotaxane Dual Organocatalyst” at the Fifth International Conference on Molecular Sensors and Molecular Logic Gates held in University of Bath, UK from 24 to 28 July 2016. Chak-shing is the only student from among the scholars who received a prize this year, and the only Hong Kong citizen from local universities to be awarded.

Chak-shing was delighted to receive the prestigious recognition from the international conference. He said, “The conference in the UK helped broaden my horizons in various areas of chemistry. I would also like to thank my supervisor Dr Ken Leung for his guidance, support and encouragement.”

Chak-shing’s project developed the novel use of the special mechanical interlocked molecule rotaxane which could be applied to enhance the overall efficiency of drug synthesis. He combines the concepts of molecular switches and organic catalysts in chemistry to generate a catalyst named the “fluorescent rotaxane dual organocatalyst”. Upon the addition of acid/base, the new catalyst can be reversibly “switched on and off” to synthesize the desired product exclusively from a mixture of starting materials.

For more details of the conference, please visit:
https://msmlg.wordpress.com/chemistry-central-journal-prizes/