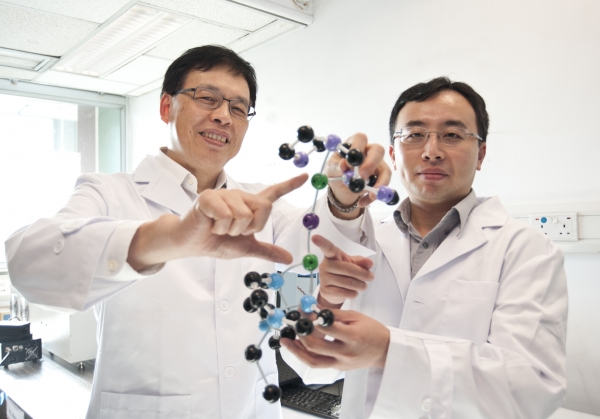 A team of Chemistry scholars from HKBU and their research collaborators in France jointly announced the outcome of their research project entitled “Room temperature molecular up conversion in solution”. The paper which demonstrates that the photon up conversion process in energy transfer can be achieved through a molecular level at room temperature was published in leading scientific journal Nature Communications (http://www.nature.com/ncomms/2016/160615/ncomms11978/full/ncomms11978.html).

This study reveals that fluoride anions added to a D2O solution of a macrocyclic erbium complex (ErL) leads to the formation of a supramolecular [(ErL)2F]+ assembly which is able to convert low energy photons to high energy photons through a process known as “up conversion”. The structure has the fluoride anions sandwiched between two complexes and held by different chemical bonds.

Dr Gary Wong said, “Conventionally, luminescence processes often result in the emission of photons at a lower energy level than that of the incident beam, but up conversion process is far less common.”

Professor Rick Wong said, “This breakthrough revealed that there is a way to excite our supramolecule with a near-infrared light source and that it gives off green emission at a molecular level.” Near-infrared light is considered less phototoxic to the human skin and produces green emission that can be easily detected using microscopes in laboratories.

In the past few decades, the up conversion process has attracted great scholarly interest. However, it can only be observed at low temperatures or high complex concentration or by high power excitation. The erbium complex dimer in the study revealed that the short metal-to-metal distance is a crucial parameter for the up conversion process to occur without harsh experimental conditions mentioned above. However, such a short distance is attributed to various chemical bonds like erbium-to-fluoride bond, hydrogen bonds and aromatic interaction.

Dr Wong added that future developments on the structure and compositions of such complexes could lead to similar observations in non-deuterated water, hence marking the beginning of luminescence tagging in numerous bio-analytical applications.