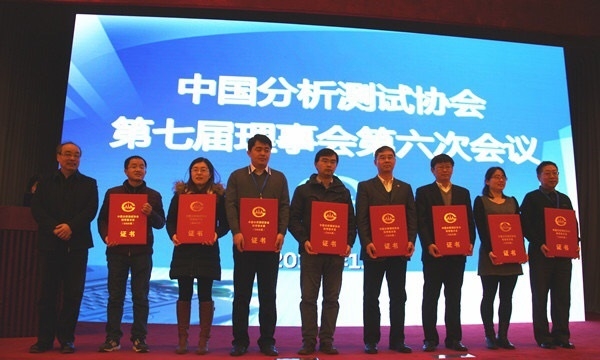 Professor Cai Zongwei and his research team recently won the 2016 Science and Technology Award First Prize of the China Association for Instrumental Analysis (CAIA). The award is for their outstanding contribution to the project entitled “Nanomaterials-assisted negative ion laser desorption/ionisation-time-of-flight mass spectrometry in the analysis of small molecules”. The Department of Chemistry of HKBU has not only been a leader in the field of analytical science among local universities, it has also achieved recognition from the international community. Professor Cai and his team are the first group from Hong Kong to receive the CAIA award since it was established more than 25 years ago.  The team developed a series of methods for analysing small molecule compounds by nanomaterials-assisted negative ion laser desorption/ionisation-time-of-flight mass spectrometry. These techniques eliminate the matrix interference in the range of small molecular weight and overcome the problem of the traditional method in analysing small molecule compounds. This widens the technical applications in environmental and biological analysis.  The CAIA award is registered and authorised under China’s National Office for Science and Technology Award. Since its launch in 1990, the award recognises scientists and organisations for the significant contributions they have made at the highest research level employing novel methods, innovative technology and advanced applications in analytical testing sciences in China with social and economic values.