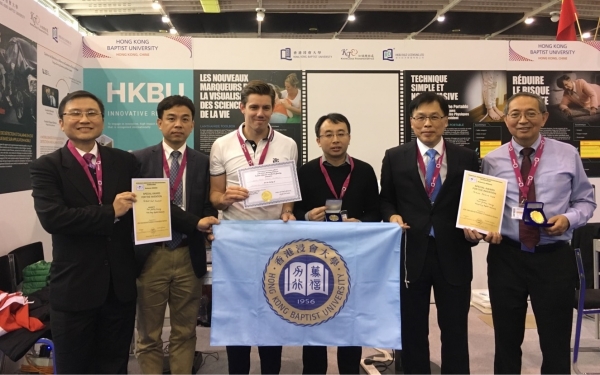 A delegation from HKBU won a total of nine top prizes, including two Gold Medals with Distinction, two Gold Medals, three Special Awards, and two Grand Prizes, at the 45th International Exhibition of Inventions of Geneva held in Switzerland from 29 March to 2 April 2017.

This is the second year HKBU participated in this prestigious international event. For two years running, HKBU is the only institution in Hong Kong that all the projects it submitted won gold medals.

HKBU submitted four entries this year. The winning projects are:

--    “Fatigue Driving Detection and Alarm System” invented by Professor Cheung Yiu-ming, Professor of the Department of Computer Science, which won the Gold Medal with Distinction in the Computer Science Category and the Swiss Automobile Club Prize;

--    The “Lanthanide Toolbox” developed by Dr Gary Wong, Associate Professor of our Department, which clinched the Gold Medal in the Medicine Category, International Innovation Award of the Polish Academy of Science Institute of Genetics and Animal Breeding (Special Medal) and the Prize of the Malaysian Association of Research Scientists;

--    The “Portable Gait Analyser Functional Flow Chart” invented by Professor Jeffrey Cheung, Adjunct Professor of the Department of Physics, which won the Gold Medal with Distinction in the Sport Category, and the Prize of the Romanian Association of Nonconventional Technologies (Special Medal).

--    The “Portable Balance Scale”, also invented by Professor Jeffrey Cheung, which won the Gold Medal in the Sport Category and the Prize of the Romanian Association of Nonconventional Technologies (Special Medal).

Extending his heartiest congratulations to the winning teams, President and Vice-Chancellor Professor Roland Chin said the award-winning inventions are all in high-impact areas tackling global real-world problems such as fatigue-related road accidents for which many researchers across the world have been working hard to come up with solutions.

The “Fatigue Driving Detection and Alarm System” invented by Professor Cheung Yiu-ming uses detection and tracking technology to analyse a driver’s facial expression and head pose captured by the real-time video on a smartphone. An alarm is automatically set off to alert the driver when symptoms of drowsiness manifest themselves.

The “Lanthanide Toolbox” invented by Dr Gary Wong is a new medical imaging reagent that can detect Joubert syndrome and other genetic disorders that come under an emerging class of disorders called Ciliopathies. This new direct primary cilium marker is able to provide a test result in a mere six hours at a fraction of the cost of the current technology through a simpler process in an environment closer to normal conditions and can achieve 100% accuracy.

The “Portable Gait Analyser Functional Flow Chart” invented by Professor Jeffrey Cheung assesses the way people walk and highlights their biomechanical abnormalities. It can also be used in sports biomechanics to help athletes run more efficiently and to identify posture-related or movement-related problems for people with injuries. This new method puts a single sensor behind a testee’s waist and requires him/her to walk 20 steps. Compared with the traditional method that uses up to 15 cameras to take hundreds of pictures, this new invention is simpler, faster and cheaper.

The “Portable Balance Scale”, also invented by Professor Jeffrey Cheung, measures people’s balance index to reduce the risk of falling over. By analysing the body’s moving amplitude when it tries to maintain balance on an unstable platform, the specific index value can then be measured. The greater the amplitude, the higher the index, with a high index indicating poor balance capability. The whole measurement process is as simple as stepping on a scale.