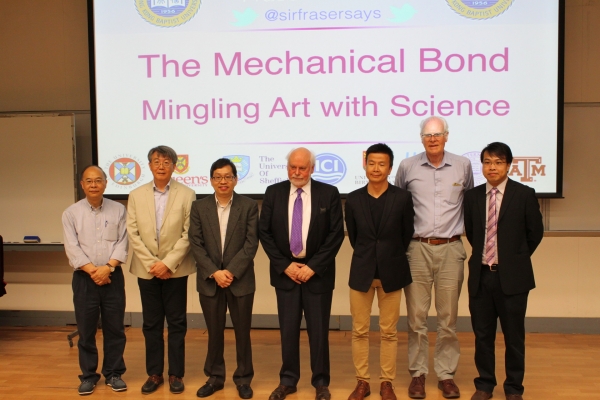 The Nobel Laureate in Chemistry in 2016, Professor Sir J Fraser Stoddart, gave an HKBU Distinguished Lecture on “The Nature of The Mechanical Bond: Mingling Art and Science” on 6 June. More than 120 guests including scholars, staff and students attended.

In his lecture Professor Stoddart, who is the Board of Trustees Professor of Chemistry at Northwestern University, USA, illustrated the nature of the mechanical bond through interlocked molecules. Interlocked molecules can be utilised as the basic components for making molecular machines. Professor Stoddart also described, by the controlled self-assembly process, the synthesis of molecular Borromean rings that resemble the coat of arms of the Borromeo family, Christianity’s holy trinity symbol, and many other icons found in historical sculptures.

The lecture was jointly organised by the Department of Chemistry, the Faculty of Science, Institute of Creativity, and the HKBU State Key Laboratory of Environmental and Biological Analysis.