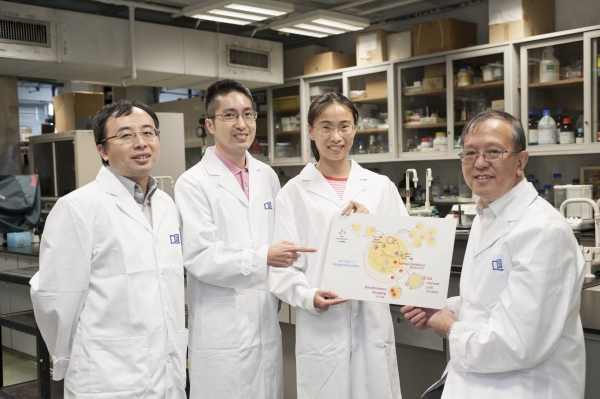 HKBU scholars along with their collaborators announced the world’s first chemical compound (probe) that can detect Epstein-Barr virus (EBV)-infected cells in mice, and simultaneously inhibit these tumour cells with an efficacy rate of above 90%. This discovery lays a good foundation for the development of therapeutics for use against diseases associated with EBV, including nasopharyngeal carcinoma which is prevalent in Southern China. The study was published in the renowned international journal Nature Biomedical Engineering.

The study showed that the probe containing the inhibitor luminesces when bound to the EBV encoded viral protein EBNA1 of EBV-infected cells in mice. It could thus be applied as an agent to detect the presence of tumours. The probe can also prevent the formation of EBNA1 homodimer and the study showed that the probe results in a 93% reduction in size of EBV-positive tumours in mice. With further development, this probe could potentially be used for imaging and suppression of human tumour cells.

Dr Gary Wong said, “The establishment of EBV latency is closely associated with the oncogenic development of several human malignancies, including nasopharyngeal carcinoma. In the past few decades, EBNA1 has been considered an attractive target for anti-viral therapy, attracting a great deal of attention from researchers working in this community. Several studies on the inhibition of EBNA1, a dual-probe to track the EBNA1 at the nucleus level, were published but an agent with dual functions is still not yet available. Our team has developed the world’s first dual agent that can simultaneously perform imaging and suppress EBV-associated tumours.”

Dr Wong said he believes the study is not only a groundbreaking achievement, but also highly encouraging as the dual agent attains an efficacy rate of more than 90% in suppressing EBV-associated tumours. He added that with further development, this probe could potentially be applied to the imaging of tumour cells in the human body and lead to the development of therapeutics and enhance the overall efficacy of targeted therapeutics.

Dr Wong envisaged that scientists could make further developments on such probes since the zinc finger structure in EBNA1 homodimer is thought to contribute to the formation of EBNA1 homodimer.

This groundbreaking research project, entitled “EBNA1-targeted probe for the imaging and growth inhibition of tumours associated with the Epstein-Barr virus”, was published in the renowned international journal Nature Biomedical Engineering. (doi:10.1038/s41551-017-0042)

Nature Biomedical Engineering and Cell Chemical Biology published a commentary respectively highlighting the findings and significance of this study.