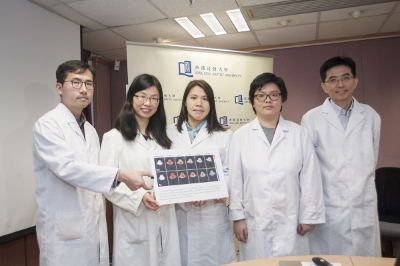 HKBU Chemistry scholars have invented a new class of multifunctional cyanine compounds that can be used for detection, imaging and thus treatment of Alzheimer’s disease. The discovery has been granted four US patents and a patent by the Chinese government. Research papers relating to the study were published in a renowned international academic journal.

The research team was jointly led by Professor Ricky Wong Man-shing and Associate Professor Dr Li Hung-wing with members from the Department of Chemistry of HKBU. By making use of the proprietary compounds, the HKBU team, on one hand, has proved that the cyanine compounds applied onto a “nano”-detection platform can quantify trace amounts of Alzheimer’s disease related protein biomarkers present in human fluids such as cerebrospinal fluid, serum, saliva, and urine. It is a rapid, low-cost and ultrasensitive detection assay. On the other hand, the compounds also serve as an imaging agent for in vivo detection and monitoring of disease progression and understanding the disease pathogenesis as well as a drug candidate for treatment of the disease.

Alzheimer’s disease is the most common neurodegenerative disorder, it is incurable and the underlying cause is still not well understood. Alzheimer’s disease is characterized by the formation of amyloid plaque in human brains. Clinical evaluation, cognitive tests and neuroimaging (monitoring the brain’s structural changes) are commonly used to diagnose Alzheimer’s disease, but are only effective after symptoms appear. Moreover, neuroimaging, such as magnetic resonance imaging (MRI), requires injecting contrast agents into a person that may bring health risks.

The proteins of interest, namely beta amyloid peptide, tau, and p-tau, in human’s cerebrospinal fluid are linked to Alzheimer’s disease. The versatile detection assay using the compounds developed by the team requires only a minute amount of the sample fluids (a few microliters) to reliably quantify the target proteins. The detection assay developed by the team is fast, cheaper and more sensitive than traditional commercially available biological methods.

Detection is based on the specific immuno-interactions between the target antigen and detection antibody that is immobilised on the surface of magnetic nanoparticles. The sandwiched immuno-assembly is then labeled with a newly developed turn-on cyanine compound that enhances the fluorescence signal, which is quantified by an imaging system.

Dr Li said, “This newly developed assay will be particularly useful as a low-cost yet accurate diagnostic and prognostic tool for Alzheimer’s disease. It can also serve as a novel alternative non-invasive tool for population-wide screening for the disease. This scientific detection assay has a high potential to serve as a practical diagnosis tool.”

Dr Li said that the new approach is universal and general enough to be readily modified and elaborated further, such as replacing the antibodies with other disease-associated antibodies, nucleic acids, for a broad range of biomedical research and disease diagnostics.

In another related study, the research team discovered the cyanine compound that exhibits unique targeting on oligomers of beta-amyloid peptides and the strong fluorescence enhancement upon binding can serve as an imaging agent for in vivo detection and monitoring of disease progression and understanding the disease pathogenesis.

This probe offers promising potential as a useful theranostic agent in early-stage diagnostics and therapeutics for Alzheimer’s disease. The research team is currently studying in vivo efficacy on cognitive improvement in Alzheimer’s disease mouse model.

The study entitled “Fluoro-Substituted Cyanine for Reliable in vivo Labelling of Amyloid-β Oligomers and Neuroprotection against Amyloid-β Induced Toxicity” was published in Chemical Science (DOI: 10.1039/C7SC03974C).