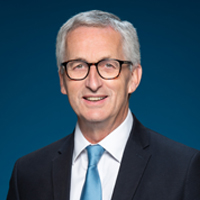 David Parker spent over fifty years living in the North-East of England. Born in County Durham, he graduated with a First Class degree in Chemistry from Oxford University in 1978. He gained a D.Phil. in 1980, working with John M Brown FRS in the Dyson Perrins Laboratory on mechanistic studies in asymmetric catalysis. In the autumn of 1980, he took up a NATO Fellowship to study with Jean-Marie Lehn in Strasbourg. He returned to Durham in January 1982 to a Lectureship in Chemistry and was promoted to a Chair in 1992. He enjoyed a 40-year academic career at Durham, serving as the Chairman of Durham Chemistry on two occasions, and was on the UK RAE panel in 2008. Today, 34 of his former PhDs and post-doctoral assistants hold leading academic positions around the world.
His research has ranged widely over the design, synthesis and mode of action of targeted probes and sensors using luminescence and magnetic resonance. In addition he has studied both d and f block metal coordination chemistry, as well as some early contributions to chiral NMR analysis. In particular, he developed families of metal complexes and bioconjugates that bind reversibly or react selectively, examining their behaviour in vitro and in cellulo, often prior to in vivo applications. He holds over 25 licensed patents and has published over 380 articles, (h = 80).
https://en.wikipedia.org/wiki/David_Parker_(chemist)