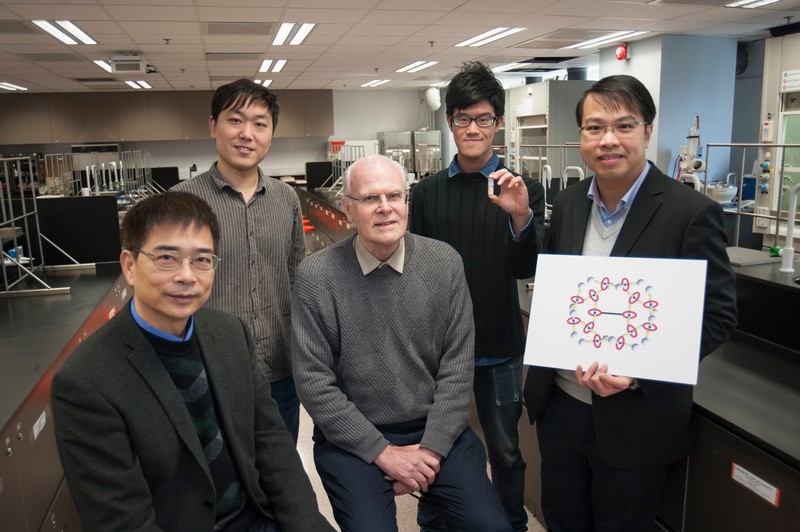 The team reported on a series of novel hyperbranched macromolecules with at most 15 mechanical bonds at the branching unit: mechanical bonds are a novel and exciting class of non-covalent bonds similar to familiar chains and hooks, for example. These macromolecules can induce an overall extension-contraction molecular motion via collective and controllable molecular back-and-forth shuttling, providing the ability to encapsulate drug molecules and release them actively by acidic stimuli.

Dr Ken Leung, who led the research, said that in current leukemia treatment, drugs are delivered to kill leukemia cells that may be present in the blood and bone marrow. The amount of drugs released to kill the free-floating cancer cells cannot be effectively controlled, however. He said the 15 mechanical bonds resemble 15 mechanical arms that actively control the delivery and suitable amount of drugs released to targeted cancer cells.

Dr Leung added that this smart material combines molecular machines and dendrimers with a new breakthrough in synthesis as well as controlled and active drug release. With its complexity and size, this synthetic molecule resembles a small virus. Due to the relatively low toxicity of this smart globular molecular vehicle, it can also serve as a potential ideal long-term drug delivery molecular machine submerged in the human body. The molecular masses of these new macromolecules were characterised by mass spectrometry, and their chemical structures and physical properties were also verified with supercomputer simulations.

Kwan Chak-shing, who completed the synthesis of macromolecules, said, “I am delighted that HKBU has all I need to complete this challenging task. The syntheses of macromolecular machines are complicated whereas the intermediate compounds require the formation of mechanical bonds followed by careful purification and characterisation. I look forward to seeing more creative research work done in HKBU.”

This research is mainly funded by the Area of Excellence Scheme of the University Grants Committee of Hong Kong, a Collaborative Research Fund of the Hong Kong Research Grants Council, and the HKBU Institute of Creativity which is supported by the Hung Hin Shiu Charitable Foundation.